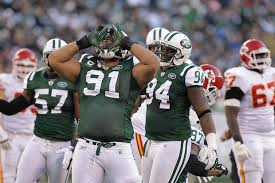 The Jets are keeping their fingers crossed, as they hope that for their game on Sunday against the Chiefs, a change at QB will be able to help the team put an end to losing seven games in a row when they go to Arrowhead Stadium. In Week 8, New York will use the services of Michael Vick, who’s very famous with local bookies, after the team went 1-6-1 ATS and 1-7 SU with QB Geno Smith, and they were able to win three consecutive games against Kansas City.

The betting line opened with the Chiefs being the favorites by 7.5 points, and the total was 42.

There are times when a change at a key position like the QB one could give a very big boost to a team, and Jets coach Rex Ryan seems to be in desperate need of this at the moment for his team to lose their losing streak, and his job can with the team can be safe if they bounce back. Smith did a terrible job for the Jets in the second season for them, and even his performances last season when he was a rookie – with 21 interceptions thrown – were better than the ones this season.

Last week, three picks were thrown by the player during the first quarter of the Jets’ game against the Bills, when they were beaten 43-23 at home, and Vick was not exactly shining on the field, as he had an interception besides two fumbles that were lost. But there’s a lot more experience in Vick, and the player will be eager to give a good impression to Andy Reid, his former coach who is now guiding the Chiefs.

Kansas City were able to finally get their act together, and at a proper moment, which would be much different than last season, when they started 9-0. The Chiefs were able to win four out of the last five meetings after having lost their two initial games , and the team has improved ATS, as they have a mark of 5-1 against the line over the team’s last six meetings. During that time, the Chiefs have only a single loss both ATS and SU, and it happened when they took on the 49ers away from home, losing 22-17 as the dogs with 4.5 points.

In all of Kansas City’s wins made throughout the last six weeks of the season, they allowed over 17 points on only one occasion, and in the last two games that they played at home, a combined total of three TD’s were given up.

Many pay per head experts believe that Vick is a better QB than Smith is, but only thanks to his experience in the game. Vick is no longer with the Steelers for a reason, as Reid gave the player another opportunity .The coach knows Vick’s good points and his bad ones, which should give him a pretty good idea of how to deal with the player.

The Chiefs are 7-3 ATS in their last 10 games against New York, and in the last five meetings that they played as the favorites by two digits, they’re 4-1 against the line. All in all, many experts and local bookies believe that the Jets don’t really stand a chance against the Chiefs.