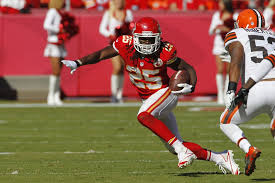 On Sunday, RB Jamaal Charles sprained his ankle when the Denver Broncos beat the Kansas City Chiefs 24-17. Now the player’s football betting fans have every reason to be worried about his status for future games, and they can clearly see that his loss is affecting the team.

Fans who watched the game saw that early in the first quarter, the player was stopped while making a run up the middle, and then he was staggering to the bench. Kansas City’s medical staff evaluated Charles, and the player was replaced in the backfield by Knile Davis.

This week, the Chiefs were trying to get the player to be more involved in their offense after they only gave him seven carries when they took on the Tennessee Titans in Week 1 of the regular season. Many fans were very impressed when they saw that a season back, the player was able to rush for 1,287 yards, which happened to be the third-most that were rushed in the league.

The player only had two carries for 4 yards and was only able to make one catch for 8, but his fans believe that he will improve his game – if his ankle properly heals, of course.

Davis was able to run on 22 occasions for 79 yards, scoring 2 TD’s, but Charles was clearly missed by Kansas City on their two drives that got stuck after getting inside the Broncos’ 5-yard line.

“Everything is magnified down there,” said QB Alex Smith said. “It hurts to have him out.”

Kansas City’s football betting fans know what an important part of the team Charles is, and hope that he recovers as soon as possible from the injury, as the Chiefs really need to see him back on the field.