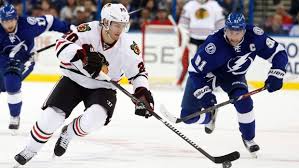 After the Blackhawks steal Game 1, the Tampa Bay Lightning are on their heels. PPH Bookie Service has Game 2 line at Tampa Bay -130 and total 5 over -135. Not much of a difference from Game 1. Best Price Per Head Agents have to assume Tampa Bay will come out guns a blazing and try to tie this series up on a piece.

The Lightning must start Game 2 with the same energy as shown in Game 1. They started off bringing it to the Blackhawks but weren’t able to sustain it throughout the game and especially in the finals minutes where the Blackhawks took the lead and never relinquished it.

A 7 game series is long, no doubt this is a hiccup for the Lightning but not one which they can’t recuperate. They just have to reestablish the mental aspect of the game and it can change the momentum in one fell swoop. Hockey is a very unpredictable as evidenced by all the come backs and series comebacks throughout the NHL playoffs.

After losing the first game in the playoffs after scoring first in the game (9-1) “Maybe we took the foot off the gas a little bit, sat back a little bit, gave them time and space with the puck,” Lightning star blue-liner Victor Hedman said. “It’s a really good team on the other side and they tied it up. Then we iced the puck and got stuck in our own end a little bit, you know it’s a tough one. But we’ve been in this situation before, losing the first game. We just have to rebound.”

After the score the sentiment was the tried to hold their one goal lead. “I think it was a great example of a team effort as far as the defensive effort, maintaining the close game throughout two and a half periods and some huge offensive contributions from some guys that have been scoring big goals, but maybe don’t get the recognition they deserve for what they’ve meant to this team offensively,” Toews said. “Power play didn’t get it done for us tonight, so someone had to come through.”

The Blackhawks now playing with house money will try to pull another stunner at the hands of the Lightning and to the dismay of their home crowd. Will it happen history does not favor the Blackhawks for Game 2?