Robert Quinn gets a new 6-year deal with the Rams 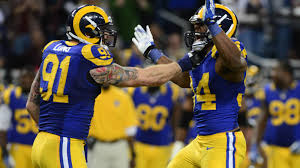 The St. Louis Rams’ football betting fans believe that the team made a very smart move on Saturday when they extended the contract of Robert Quinn for six more years.

St. Louis confirmed that the player was signed by the team on Saturday afternoon, just before they flew to Tampa for their game against the Buccaneers on Sunday. Sources reported that the player’s contract is worth $66.575 million, with a guaranteed $41.2 million.

“My family and I are excited about this opportunity,” Quinn said. “I would like to thank (owner) Mr. (Stan) Kroenke, the organization, my teammates, coaches, and the St. Louis Rams fans for their support. St. Louis has become home for my family and I, and we look forward to being here for the long term.”

While the four more years were added to the player’s contract to the two that were left, this is really a brand new six-year deal, and the money that Quinn is set to receive will be spread throughout that time. His contract is now running through the 2019 season, and the player will be paid about $11 million each season played.

On Saturday afternoon, the Rams posted a photo on Twitter of the player signing the deal.

St. Louis now secured the services of one of the best pass rushers in the league after the 24-year-old was able to finish last season as second best in the NFL with seven forced fumbles and 19 sacks. Quinn is only behind the Texans’ J.J. Watt – who has 29.5 sacks – since the beginning of the 2012 season.

Quinn’s football betting fans were very surprised to learn that the player’s deal is the second largest made in the history of the NFL, just behind the deal that QB Sam Bradford got. He signed a $78 million, six-year contract with a guaranteed $50 million after St. Louis picked him in the NFL draft of 2010 as first overall.

St Louis recently changed the contracts of receiver Austin Pettis and defensive end Chris Long in order to make some space, but it is currently not clear if those contracts affected Quinn’s deal in any way.