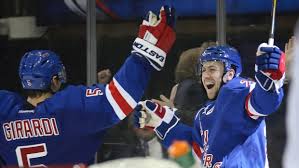 The resilient Rangers came back from a 3-1 deficit to beat the Washington Capitals in Game 7 to advance to the Eastern Conference Finals. I guess if y you put their backs against a wall they respond. Derek Stepan scored with 11:24 in overtime to give the New York Rangers the win. Pay per head solutions and Sportsbook Software Solutions have the New York Rangers at 2/1.

“We have a good group that keeps their wits about them and keeps calm,” said Stepan, who was mobbed by his teammates along the glass as Madison Square Garden shook from the cheers. “There is no real panic. We just go out and play. We just see what happens and we just play hockey.”

Stepan’s goal was a wrist shot from the left win after he won his faceoff. It’s a rare shot for the Ranges but they aren’t strangers to coming back from a 3-1 deficit. They also accomplished the feat last year against the Pittsburgh Penguins.

“It’s a very special win,” said Henrik Lundqvist. Henrik made 35 saves and also became the third goalie to win six game 7s. He joined a very select group that includes Patrick Roy and Martin Brodeur. The Rangers will now face the Tampa Bay Lightning for a chance to play for the Stanley Cup. They lost last year in the Eastern Conference.

Alex Ovechkin was the first to score in the first period for Washington. The Caps have lost five game 7’s which most likely has been a thorn on the side of Ovechkin for his career.

The overtime started out pretty shaky but Lundqvist took care of business and the Rangers came out with the victory. “It’s hard to really explain,” said Dan Girardi, whose shot from the point led to Stepan’s winner. “We were down and it looked like we were down and out, and we found a way to crawl back in this series and win one game at a time. We knew coming into this barn in Game 7 anything could happen and it went down to the wire.”

This was the Rangers fourth overtime win in as many tries and all by 2-1 scores. “Great series. It was fun to be a part of, obviously not fun to be on the losing side,” Holtby said. “We left it all out there. I don’t think there was one guy who wasn’t committed. That’s life sometimes.”