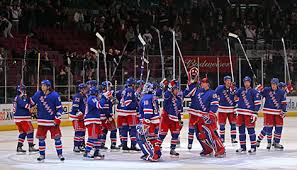 The Rangers did it again, coming from the jaws of loss to force a decisive Game 7 back in New York. They just accomplished the feat in their last series, so it seems to have become a theme for them loss early and win late.

A message from the coach to Derick Brassard and Derek Stepan: The New York Rangers need more from you.

“I got challenged by my coach this morning, me and Derek got challenged,” Brassard said after his first career playoff hat trick helped the Blueshirts to a 7-3 victory over the Tampa Bay Lightning to force a seventh game in the Eastern Conference finals.

“He was not disappointed in us, but he wanted us to elevate our play,” continued Brassard, who made it a five-point night with two assists.

Vigneault’s challenge lit a fuse, after watching opposing star Tyler Johnson and Steven Stamkos play so well. “Since I’ve been playing hockey in junior and I get challenged like that, I always try to answer. I was already hard on myself, and it got me more mad this morning,” Brassard said.

“We just talked about how good we need to be for our team to be successful. Just needed a bit more from us.

Bookmaker Solutions had the Rangers at +210 on May 15, now they are the brink of going to the Stanley Cup Finals. They might be playing possum. I hope not; if you’re a Rangers fan with a weak heart, watch out. Online Bookmaking Solutions have the New York Rangers vs. Anaheim Ducks at +200.

Since being down the Rangers has been focused you can sense after their morning skate. “It was a little quieter [before the game], but still loose, still confident,” said blueliner Marc Staal. “When you get into this type of situation, it’s playoff hockey, it’s great, you’ve got to be at your best or you’re going home. We’ve got a lot of guys that thrive in that situation. We were pretty businesslike this morning, a little quieter than normal, we knew what we had to do.”

Tuesday’s game did not reflect the score as it was much harder then it seemed. “Give them credit, that last half of the first period and the second period, they were forechecking really hard, we had no time to make plays,” Staal said of the Bolts. “That’s when Hanky came up huge for us and kept us in it. In the third, we played a very confident and solid period.”Let’s see if the Rangers can pull off the feat and play for the cup.