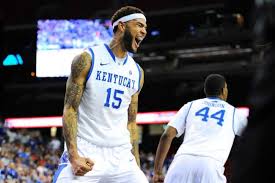 Willie Cauley-Stein is one half of the twin towers Kentucky brings out to the floor every night. He is a high motor rebounding and defensive specialist, every team would love to have. Cauley-Stein can literally guard form1-5 as evidence of the last play in the Kentucky, Notre Dame game. Where Willie picked up Notre Dame Guard Jerian Grant full court and defended him up court forcing Grant into a difficult shot which ultimately gave Kentucky the win.

Many online sportsbooks compare WCS to Tyson Chandler and I believe that’s a fair assessment. They both play the same position and pretty much play with the same intensity. The comparison is fair and warranted. He plays with a football player mentality and it works for him. His offensive game is light years away from his defensive game, but with all the intangibles any NBA team will find a place for him on their team. He can be considered somewhat of a late bloomer which adds more intrigue for NBA general managers and online bookmaking solutions. His touch outside the paint and free throw percentage need much to be desired as with all young big men coming to the league.

Mock drafts have him going from 5th to late lottery. Every year bigs rise up draft boards when they are on the clock and WCS won’t be any different. He has the guile to be a very serviceable big for many years.

Teams that are in need of a big man are the Knicks, Lakers, and Kings. They are in play for the big man, and in he would be able to play heavy minutes for those specific teams. WCS stayed three years in college and it was tom his benefits, as he has turned into an NBA Lottery pick. His shot blocking and defense are definitely his calling card but he has room to grow offensively if he can develop a 15 footer. He will definitely be able to score garbage points and alley-oops if paired with the right point guard.

All in all WCS is an intriguing prospect and will be able to help immediately and for many years to come He doesn’t have as much upside as other players in the lottery, but is a very safe pick.

Online sportsbook services are just waiting for the ping pong balls to fall, to see what type of odds can be posted on that will be the first pick.