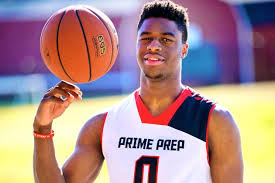 Emmanuel Mudiay, Born in the Republic of Congo, March 5th 1996. A 6-5 power point guard, with quickness in the mold of a Derrick Rose or John Wall, form the hometown of Arlington Texas. Many NBA general Mangers drool over these types of intangibles and Mudiay is no different. Mudiay is an intriguing case for the simple fact he did not play in college last year. He decided to go a different route. Some would say a harder route. He chose the route most recently done by Detroit Piston pointgaurd, Brandon Jennings.

Mudiay chose SMU over Kentucky where he was supposed to be a pivotal part of rebuilt program in SMU. Larry Brown is at the helm and in charge of all basketball activities. That actually never transpired. Mudiay went overseas and signed a one year $1.2 million contract with the Guangdong Southern Tigers. He had this to say when he signed the deal. “This is not an academic issue. …but rather a hardship issue,” Larry Brown said this about Mudiay situation that it was “unique.”

Since he did not go to college scouts weren’t able to see him during the season or at the NCAA tournament. They would have to travel to China and/or use film that has been gathered from high school. His attributes jump off the page but he does have his fair share of weaknesses. He is a very streaky shooter who needs help on his midrange game. He also takes too long to get the shot off. His free throw shooting needs help and can become more vocal being he’s the man in charge of getting everyone to their spots. He can over dribble at times and would rather make a flashy play then the right play. All of these traits will disappear once he gets into a real NBA program.

He has the making of a future NBA star and should go no later than top 5. Sportsbook software & Bookmaker software predict he would be best suited for these two NBA franchises, LA Lakers or the Philadelphia 76ers. Both teams are in need of point guards and the top two would be him or Ohio State PG/SG DeAngelo Russell.

All in all Mudiay is a true point guard with dynamic speed and athleticism with great size. Finishes strong at the rim, is a good rebounder and can post up smaller guards. He can be the next big thing.