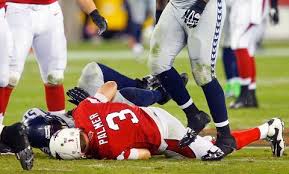 The Arizona Cardinals’ Carson Palmer was not able to play against the New York Giants on Sunday, and price per head agents can see that the way that things are looking right now, the player might end up missing a few more games. Then there’s also the possibility that he might not miss a single game. The quarterback, who’s currently struggling with an injured nerve in his shoulder, is in the dark over when he will return to action.

A 34-year-old Palmer suffered the injury when the Cardinals beat the Chargers in Week 1 of the regular season, and many experts believe that this could end up being a massive blow for the team.

“They said my shoulder was stretched out and I landed on the nerve, shut the nerve down,” said the player, as reported by the Arizona Republic. “It’s just one of those things you’ve just go to wait and hope it wakes up. There’s no, ‘It needs 48 hours. It needs six days, it needs 12 days.’ You just don’t know.”

The player does not seem to be very optimistic at all that he’ll return to the game soon, and price per head agents can see that this is not coming as very good news to many fans. Drew Stanton, backup QB, was able to perform well enough against the Giants for the team not to lose the game. However, it isn’t easy at all to imagine Arizona being the ones to win their next two games without the services of Palmer, something that is worrying many Cardinals fans.

In Week 3, the Cardinals will take on the 49ers at home – then in Week 5 they will go to Denver to face the Broncos. If the player isn’t able to face San Francisco, he will have an additional week to see if he properly heals from the injury thanks to Week 4, which would be Arizona’s bye week.

The NFL world knows that Palmer’s injury could seriously get in the way of the Cardinals, and they would like to the see the player make a very good recovery – hopefully very soon.