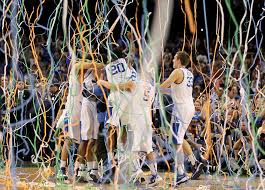 I have a trivia question. Which is the only team in the N.B.A. with a bigger frontline then the Kentucky Wildcats? The answer would be the Portland Trailblazers. Are you kidding me, how the heck are you supposed to score. Wait a second, that team went undefeated, has potentially the first pick in the draft, another sure fire lottery pick and maybe the most enigmatic and pro developing collegiate basketball professor of this era.

So they have this wrapped up, right. Willie Cauley-Stein can guard anybody from Notre Dame’s Jerian Grant a 6’5 combo guard or Jahlil Okafor a 6’11 offensively polished low post scoring center. Karl-Anthony Towns, a 19 year old with untapped potential, and who plays for coach Calipari in the Dominican National Team. They also have a bevy of guards who can step in, in a moment’s notice and change the complexion of a game.

Who are there biggest threats for the chip? That would be the Duke Blue Devils with Jahlil Okafor, standing tall and talented. The Wisconsin Badgers with Frank Kaminsky a versatile inside outside scorer. And last but not least the Villanova Wildcats led by senior Darrun Hilliard II.

At this moment price per head agents have set the odds to win for these 4 teams. These are the prices. The Kentucky Wildcats are the odds on favorite at 1/1. Duke Blue Devils are 6/1, Wisconsin Badgers are 7/1 and the Villanova Wildcats are 10/1. Who will be crowned?

I know what I want to see. I think I know what everyone wants to see, and that’s Duke vs. Kentucky for the National Championship, Okafor vs. Towns for the spotlight. These two guys have been going at each other for years and both share a mutual respect for each other. Towns going as far as saying he just loves what a nice human being Okafor is. The clash will be another monumental battle of college heavyweights.

Kentucky will go all the way. The only ones that can beat them are themselves. I doubt Calipari is going to let that happen. They have every tool imaginable to get it done. Seniority in Stein helps, along with the youth and talent of Towns to go along with the rest of their talented roster. I know price per head agents would love for a Cinderella to emerge or at least Kentucky to go down, and I’m not saying it can’t happen, but I don’t see it. And agents shouldn’t be banking on it either.