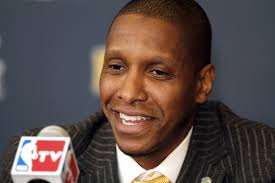 Price per head sportsbooks learned that the NBA handed Masai Ujiri, Toronto Raptors general manager, a $25,000 fine for the expletive that he yelled on Saturday at a pep rally before the Toronto Raptors’ home playoff opener.

According to sources, Ujiri was given a formal warning but wouldn’t be fined after separate conversations on Monday with president of basketball operations Rod Thorn and NBA commissioner Adam Silver.

Sources said that NBA officials then reconsidered and decided to give him the fine, marking that this month it was the second time that a disciplinary decision was revised.

The Dallas Mavericks were initially told that Sean Heath, public-address announcer who is very well known with pay per head services, would be suspended after releasing tweets critical of the officiating in a late-season loss to the Golden State Warriors at home before the penalty was reduced to a $25,000 fine.

Ujiri yelled “F— Brooklyn!” at a fan rally outside Air Canada Centre before Game 1 of the Raptors’ first-round Eastern Conference playoff series against Brooklyn on Saturday – a 94-87 win for the Nets, leaving many fans and price per head sportsbooks very surprised with his reaction.

Pay per head services found out that a fan captured Ujiri’s use of the expletive and it was posted on Instagram. Later on Saturday, Ujiri apologized at halftime during a brief session with reporters.

“Wrong choice of words out there,” he said. “It is really not about me. It is about the players and the playoffs.

Ujiri, who during the session didn’t answer any questions, said that he does not like the Nets, and price per head sportsbooks can clearly see this.