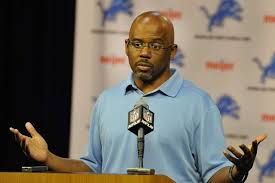 On Monday, not much was said by Detroit Lions general manager Martin Mayhew on what the team is planning to do in the draft this week. However, price per head sportsbooks saw that he did make it clear that the Lions do not want to trade defensive tackle Ndamukong Suh.

“We’re not looking to trade him. We have no plans to trade him,” Mayhew said. “I haven’t had any conversations with anybody about trading him, except in January I did get a call from a team that had interest. Offered me a box of old tube socks, and I said no thank you.

Suh is entering the last year of his rookie contract and has a $22.4 million salary-cap number – factors that pay per head services are sure helped fuel trade speculations.

But earlier in the offseason, team president Tom Lewand and Mayhew often said that they expected a deal to be made soon.

In January, Suh fired Relativity Sports, and until March the player didn’t hire new representation. Price per head sportsbooks found out that he also refused to show up to voluntary workouts that started last month, which were attended by almost every other Lions player.

“We’re in negotiations,” Mayhew said. “I don’t think it really benefits to try and gauge where you are. Are you close? Are you far? All that. I’ve done this for a while now and you can say you’re close, but you’re not close until everybody signs it. You can say you’re not going to get it done until the time passes for you to get it done. We’re in ongoing negotiations.”

Mayhew said that he expects the player to arrive in mid-May, as he did in past years, and that “it doesn’t shock” him that Suh did not yet show up at the Lions’ facility, but pay per head services will be keeping their eyes open.