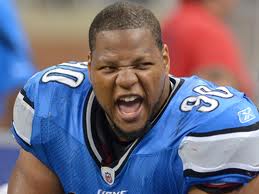 On Wednesday afternoon, Detroit Lions defensive tackle Ndamukong Suh said that he’s waiting for the league to let him know about his appeal, and price per head sportsbooks would like to see what the outcome of this will be.

Pay per head services found out that in a hearing on Tuesday, the fourth-year pro appealed the $100,000 fine given to him by the NFL for a low block on Minnesota center John Sullivan in the season’s first week.

Suh did not want to specify what was spoken with league officials, saying that it was the NFLPA and his agent Roosevelt Barnes that took care of his defense.

But league sources said that Suh argued that his hit was a legal one and that other players made worse fouls without being fined a similar amount or getting suspended, and price per head sportsbooks can see the controversy.

Suh said that one thing that he was not asked at the hearing was over an incident that took place two weeks ago, when his elbow hit the back of the head of Arizona Cardinals offensive lineman Eric Winston. On Monday, Winston told ESPN.com that he had doubts that the elbow was intentional. Price per head sportsbooks saw that ProFootballTalk.com initially posted the video on Saturday.

When the player was asked whether he felt that people looked for anything in his play because of his history, he pushed the question aside.

“That’s your opinion,” he said. “That’s something you’ve got to make on your own decision. To me, it’s really petty. The game’s over with. Me and Winston had great interaction throughout the game.

“There’s no bad blood there. I look forward to playing against him in the playoffs or down the road.”