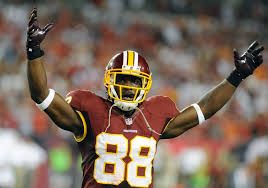 Price per head services saw that Pierre Garcon, Washington Redskins receiver, again said what he believes is the truth about QB Robert Griffin III, and Garcon thinks that Griffin is a different player because of it.

“He’s not fully healthy, obviously,” Garcon said. “He’s running a little bit more, but last year’s RG III was a lot different from this year’s because of the knee. It’s not surprising. It’s been talked about the whole offseason. It’s the same question every day. We can find something else to talk about.”

Pay per head servicers know that as Griffin is still recovering the explosiveness that he had last season, Washington’s offense is not as intimidating. Defenses dare the player to run, as they focus on blitzing Griffin on third downs and stopping RB Alfred Morris on the ground. Detroit didn’t always blitz in the Redskins’ 27-20 loss Sunday to the Lions, and the player found one gap for a 21-yard gain late, but price per head services saw that he fumbled as he dove.

“I don’t think he’s 100 percent, but he’s definitely giving 100 percent to get 100 percent,” Garcon said. “He will eventually get there. I had injuries last year. I know what he’s going through. It’s not surprising, but it’s just something you have to deal with.

“When you win you never talk about anything bad, but when you lose everything gets magnified. He’s coming off an ACL injury, which we all know is tough. If we were winning, we wouldn’t be talking about his knee.”

In the preseason, Garcon said, “We have the potential to be the best offense ever, really.” But price per head services know that after three games, Washington rank 19th in points per game with 53 points (the defense accounted for 14). The team is fifth in yards gained, but they only have a single touchdown in the first half.

“We have the potential,” Garcon said. “We have the players. It’s just, the ball’s not bouncing our way. … We’re getting better. We’re making plays. We’re moving the ball down the field. But we still have a lot to do.

“It’s not about running the ball from a quarterback standpoint. It’s about completing passes and everything and having the whole offense come together.”