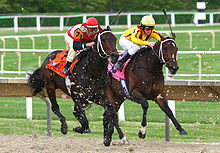 Sports betting through offshore price per head companies has long been mobile ready, and then Leroy’s in Nevada became the first brick and mortar sportsbook to offer a mobile betting app to its patrons within the state borders.

So what’s next? Now every New Jersey racetrack enthusiast can now do the same, and be paid out for their wins faster per head than the horse that won.

The Bill No. A-2610, also known as Dancer bill, submitted on May 10th of this year aimed at modernizing the racing world by catching up the race track with today’s technology.

“Smart phones and other mobile devices are so engrained in our daily lives that they seem to have become an extra appendage. Racetracks should be permitted to take advantage of the types of technology that people are so accustomed to using,” Dancer, R-Ocean, Burlington, Middlesex and Monmouth. “Allowing racetracks to keep up with the times will improve the experience for fans and help New Jersey facilities gain a competitive edge over states competing for fans.”

“Horse racing is one of the oldest forms of sport in the world that could benefit from a modern twist that would eliminate the decades-old practice of standing in line to place a bet and collect winnings,” Dancer said. “This would be a major innovation to wagering on horse racing and make New Jersey a model on how to utilize various forms of Internet technology in horse racing.”

This past week seems to have been a big week for the politicians and people of New Jersey. Tuesday saw the unsealing and arrests of an indictment for loan-sharking, gambling, and racketeering against 13 mobsters, who were using a per head sportsbook in Costa Rica.

Then Governor Chris Christie surprised the state by announcing he was pushing the sports gambling bill forward, regardless of federal support, and expected it to up and running by fall.

It seems New Jersey wants to keep its gambling revenue within the state borders, and we won’t be surprised if they soon pass a Leroy’s type bill. Will that may be enough to slow down the per head industry in New Jersey?