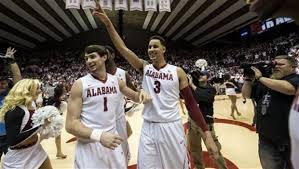 On Thursday, Florida and Alabama are set to face each other in the SEC tournament of the NCAA, and price per head sportsbooks are looking forward to a very interesting showdown when these teams face each other.

Florida was able to finish the season at 15-16, and in the standings of the SEC the team currently have ninth place. The Gators have a 64% average with a 43.6% in shooting, while in their defense 59.9 points are allowed, and 40.8% are shot by the team’s opponents. The player to lead the Gators is Dorian Finney-Smith, with an average of 13.1 points, as well as 6.0 rebounds for each game played. Michael Frazier II has an average of 12.8 points, and 8.7 points were recorded by Eli Carter. There’s a 7.3-point average for Kasey Hill. In the SEC, the Gators are 8-10, and at neutral sites the team is standing at 2-2.

This season, Alabama were 18-13, and in the standings of the SEC the team was able to finish in eighth place. The Crimson Tide have a 66.9 points average, with a 43.8% in shooting, while 63.9 points are allowed in their defense. 41.4% is the shooting average of the team’s opponents. The player to lead the Tide would be Levi Randolph, with a 15.2-point average, as well as 5.0 rebounds for each game played. Rodney Cooper has a 10.5-point average, and Michael Kessens has an average of 6.0 points, as well as 5.4 rebounds. Retin Obasohan has a 5.5-point average. In the SEC, the Tide are 8-10, and in games played at neutral sites they’re 1-1.

In their last six meetings, the Gators are 1-5 ATS, and 0-5-1 ATS in games played at neutral venues. They’re 1-4 ATS when facing teams with positive records. The Gators are 7-18-2 ATS after a win, 1-4 ATS in game splayed at neutral venues, as well as 0-4 ATS after a meeting where they covered. In 10 out of the last 14 games between the teams, the spread was covered by the underdog.

Price per head sportsbooks can see that overall the Tide have a better record than the Gators, and they won big when they faced the Texas A&M Aggies, but four of their main scorers are out, something that comes at a very bad moment for the team. Even though many price per head sportsbooks believe that Alabama have the better side, they think that Florida will be the ones to win this match.