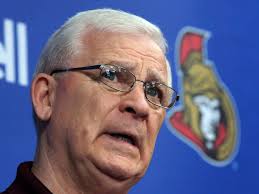 Bryan Murray GM for the Ottawa senators is battling Stage 4 colon cancer. Watching the Senators go through this improbable run while dealing with his own issues is what all people dream for when faced with a life or death situation. What the dream for is its called hope. Hope is what this special group has given Murray.

After a comeback win Murray says “My sister actually texted me and she was talking about the game and she was asking me how I was feeling because she knows I had chemo yesterday,” said Murray. “Well, you don’t sleep the night after you have chemo, but I feel pretty good today because of the team. There’s no question.”

He is having so much fun, the Senators have been in 5 consecutive games of extra time and he’s right there with them cheering them on. It’s a thing of beauty to witness a man fighting through cancer but at the same time enjoying the game and not thinking about the illness but consumed in the teams journey as well as his. “It goes hand-in-hand,” said Murray. “I’ve talked to my oncologist about this, ‘How involved should I be and how is stress going to affect my life and all that?’ He’s all positive. It’s good to be part of something like this.”

Murray’s battle has put everything in perspective; he says “If you care, you have stress,” said Murray. “That’s the one thing I don’t think you ever overcome. I get as emotional game about games as I did when I was 25 years old.” “I’ve been in (hockey) a long time and I don’t know that I’ve experienced this type of run with any team,” “The character that they’ve shown, the comeback ability, the no-quit.”

The Senators have given themselves a chance with this 19-3-3 run. Price per head agents has them at 50/1 to win the Stanley Cup. As long as they are in the hunt there will be live betting service for the games. As for Ottawa these are the stories that pull everyone together, let’s see if Murray and the Senators make history.