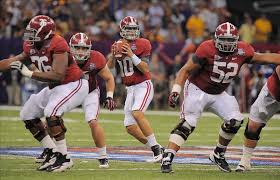 The Florida Gators were not very impressive at all before their showdown against NCAA football giants Alabama on Week 4. They were able to beat the Kentucky Wildcats, but price per head agents saw that three overtimes were needed by the Gators to take them out.

The Gators beat the Wildcats 27 times in a row before their home game last Saturday. 369 passing yards were given up by Florida, and the team was not able to do much on a +2 turnover lead after they were able to intercept Wildcats QB Patrick Towles on three occasions.

Florida’s offense and defense will have to make some very big improvements if they want to avoid being beaten again on the road by the Alabama Crimson Tide.

QB Jeff Driskel did a mediocre job with balls that were overthrown, and those could’ve helped them make very big gains on the field if thrown correctly. To make matters worse, he had another intercepted pass.

In general, sophomore WR Demarcus Robinson could have made his QB appear better than he did. Against Kentucky, the player was able to catch 15 passes for 216 yards and two TD’s, which proved to be a very nice repeat of his first game against the Eastern Michigan Eagles, where he recorded 123-yards and a TD.

This season, Alabama already showed what many believe is a weak secondary. In Week 1, they allowed 365 yards to the West Virginia Mountaineers, when 143 yards and a TD were recorded by receiver Kevin White. Many fans believe that Florida could stand a chance against Alabama with their offense if Driskel can properly link with Robinson again.

After a win of 10 points in Week 1 against the Mountaineers, the last two games saw more of the 40-point trouncing of non-conference opponents who happened to be overmatched by Alabama. But neither victory margin was able to cover, and this season the team is 0-3 ATS so far.

The Tide’s last two victories were able to show how strong their offense is. When they took on Florida Atlantic, quarterbacks Jake Coker and Blake Sims combined to record 430 yards and three TD’s, as their amazing running game ended up running the show with 333 yards and 5 TD’s when they faced Southern Mississippi.

There was one constant in all three of the Crimson Tide’s games, and he was WR Amari Cooper. The player, throughout three games, was able to record an average of 151 yards with 11 catches made on each one. After seeing what Mountaineers freshman Garrett Johnson – 154 yards, 6 catches, and two TD’s – was able to do against the Gators’ secondary, Cooper would want to add up to what he already accomplished.

Regarding their defense, the Crimson Tide’s front seven were able to completely close the running games of all three of the teams they faced, as in 66 attempts they only allowed over two yards per carry, and price per head agents can see that they’re very powerful in that part of their game.