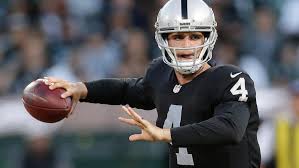 This year, the Oakland Raiders will have Derek Carr as their starting rookie QB in Week 1 of the NFL’s regular season, and pay per head agents believe that the team made a very good move in letting the player start in the game, as they’re very well aware of his amazing talent in the sport.

The Oakland Raiders’ Matt Schaub will be replaced by Derek Carr in the team’s away game with the New York Jets on Sunday.

Schaub was the starting QB in the Raiders’ first three games of the preseason, but was not able to play against the Seattle Seahawks last Thursday, and was recently suffering from suffering from tendonitis on his elbow. That paved the way for Carr, who for 143 yards was able to complete 11 out of 13 passes, and ended up scoring three TD’s against Seattle.

The player had no choice but to miss the Raiders’ third game of the preseason due to pain in his ribs. In the second game of the preseason, Carr also had a concussion – something that worried many fans. However, Carr took Schaub’s place and got the starting role, as he was able to impress at training camp.

In March, Schaub was acquired from Houston with plans that he would be the one to open the regular season. However, that didn’t stop Oakland’s plans for Carr’s future, and in May’s draft they turned the player into the team’s 36th overall pick, with the future already here.

Up until the player’s promotion, pay per head agents thought that the Raiders were ready to open their regular season for the very first time since 200 7 without the services of a starting rookie quarterback

Many fans were very impressed with Carr when he played in college, as he was able to score 113 touchdowns and threw for 12,843 yards at Fresno State in 43 games. Last season, they saw that Carr was very impressive on the field, and was the one to lead the Bulldogs to a record of 11-2.