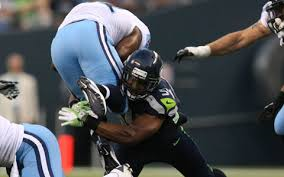 Seattle Seahawks middle linebacker Bobby Wagner and many pay per head sportsbooks believe that the Denver Broncos felt intimidated by his team’s defense from the beginning of their 43-8 Super Bowl XLVIII loss to the Seahawks.

Price per head services saw that the player was a guest on Tuesday at ESPN’s “First Take” in LA when co-host Stephen A. Smith asked him if he thought that the Seahawks’ defense intimidated the Broncos’ offense

Wagner and many pay per head sportsbooks that followed the game thought that he intimidation started early on, with Seahawks strong safety Kam Chancellor’s hard hit in the first quarter on Broncos receiver Demaryius Thomas on a short crossing route.

Pay per head sportsbooks saw that Chancellor launched into Thomas’ shoulder high and knocked the player backward five yards when Thomas was making the catch.

“You didn’t really see too many balls caught across the middle [after that play]. They were very timid. That says a lot about our defense.”

Wagner said that physical intimidation is what Seattle enjoy as players, and pay per head sportsbooks can clearly see this.

“If you go out against our defense, you really have to have your head on a swivel because everyone is trying to tackle you,” Wagner said. “If I miss a tackle, somebody else is going to come and clean it up. Everybody is coming after your head.”

Seattle will play on Aug. 7 at Denver in the preseason. The Broncos will take on the Seahawks on Sept. 21 in Seattle, on the regular season’s third weekend, and pay per head sportsbooks can’t wait to see the action.