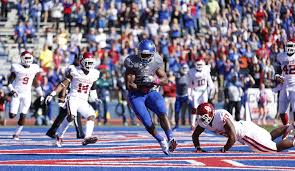 Oklahoma were beaten in three games in the conference since they started 4-0 this year, and the Sooners will look to bounce back when they take on Kansas at home in week 13. Pay per head services believe that the Jayhawks’ plans will be much different after a close game in week 12 against TCU.

The loss of Trevor Knight for the second game in a row could haunt Oklahoma, as QB Cody Thomas was struggling in the first start of his career, as three interceptions were thrown by the player, and he was only able to complete 50 % of the passes that he made. So far this year, the player was able to complete 47% of all of his passes made for 183 yards, four interceptions, and a TD. Without a doubt, WR Sterling Shepard will continue to be the team’s biggest target even in the absence of Knight. Shepard will be the one to lead the Sooners with 50 catches made for 957 yards and five TD’s, with Durron Neal in second place, as he caught the ball 39 times for 497 yards, scoring three times. RB Samaje Perine is the one who’s leading the team’s running game with 1,001, scoring 14 times, and Alex Ross has a yards-per-carry average of 7.6, with three scores and 518 yards.

In week 12, the Jayhawks’ game proved to be a very tight one, with TCU scoring 30 points, which was the best they did so far this year. QB Michael Cummings was very solid on the field when they were beaten, as the player recorded his career’s first 300 yard game, and was able to throw two TD’s as he ran for another one. The player has 1,492 yards so far this year, with only three interceptions and seven TD’s.TE Jimmay Mundine is the one who’s leading all WR’s with 537 yards and three TD’s made on 40 catches, as on 429 yards, WR Nick Harwell has 41 receptions, scoring twice. RB Corey Avery is leading the team’s rushing attack – ranked 102 – as on only 4.2 yards per carry, the player recorded 565 yards and five TD’s.

When it comes to their defense, the Jayhawks were one of the country’s worst units in their consistency. Kansas have a raking of 96th place when it comes in total allowed yards, besides being 93rd place in the nation in points allowed for each game played. Oklahoma have a ranking of 51st place in their scoring defense, and their total defense is ranked at 79th place in the country.

Considering both teams’ records and the way that they performed this season, pay per head services believe that the Sooners could be the ones to win this showdown.