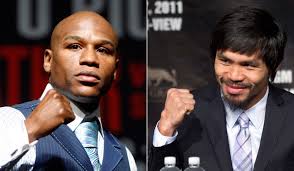 Manny Pacquiao is set to hold a press conference together with Floyd Mayweather on the 11th of March in Los Angeles, and both fighters won’t face each other again until they meet for their last press conference taking place at the MGM Grand just days before their highly anticipated fight on the 2nd of May. Now pay per head wagering companies can’t wait to see what they have to say as the build-up to the big clash continues.

Fans around the world were waiting for a very long time for this showdown, and were overjoyed to learn that it will finally take place.

Pacquiao and Mayweather already started to train for the fight, with the Filipino arriving in LA during the weekend. The fighter is now training in Hollywood at his trainer’s Wild Card gym, while the American is training in Las Vegas, in his very own gym.

The Filipino already shed some light on what he’s doing in his training – he ran a couple of miles on Monday, then he was shadow-boxing for a couple rounds. After that he worked out his abdominal muscles, and then breakfast followed.

The fighter then took a nap until midday, followed by lunch before going to the Wild Card Gym, which is owned by Freddie Roach, his trainer.

“I will prepare hard for this fight to give the boxing fans the kind of entertainment they want. This is what I consider the real fight of my life,” said Pacquaio, and pay per head wagering companies know very well what an important clash this is for the fighter.

Pacquiao issued an apology for avoiding journalists at the airport in LA after he was whisked away on Saturday by immigration officials.

“The head of the immigration in LA led us to the backdoor. So I was not aware that many journalists were already waiting for us outside,” said Pacquiao. “My heartfelt apology to all of them.”

The Filipino started to get ready for the showdown without the help of Roach, who until next week will not be in the US, as he’s getting Zou Shiming ready to have his world title clash when he faces Amnat Ruenroeng on Saturday, in a fight taking place in Macao.

Roach also said that the Filipino’s training routine will not be put in the public eye.

“I won’t tell you what the game plan is because that will be very silent,” he said. “The whole Wild Card will be shut down and we will work out Manny’s best strategy and nobody will watch it.”