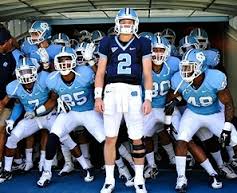 Local bookies and many fans following North Carolina were very worried when Larry Fedora said that four of their players would be suspended after Wednesday’s practice.

North Carolina’s coach said that defensive backs Donnie Miles, Desmond Lawrence, M.J. Stewart, and Brian Walker, will not be able to play for the Tar Heels when they take on Liberty in their opening game, and now the team’s fans would like to see how this will affect the team’s performance.

Walker and Lawrence are both starters in the Tar Heel’s secondary, and many fans consider them to be key pieces in the team. Now they believe that their absences could prove to a big blow for their opening game, but they also know that if the players were suspended it must have been for a reason – and a serious one.

“We hold our players accountable for their actions at all times,” said the coach.

“These players did not meet the high expectations we have for them as members of our program and have been disciplined accordingly. They will not play on Saturday or be on the sideline with their teammates.”

Even though Fedora did not thoroughly explain the reasons why the players were suspended, many fans remember very well when the Tar Heels investigated what was reported as hazing. Several players were allegedly involved in the incident, and the team’s fans were even more concerned when they found out that there was a concussion involved.

Jackson Boyer, wide receiver, was attacked by a group, in an incident that reportedly took place during fall camp at the team’s hotel – and the result of this whole mess was a concussion, something that fans and experts know should not be taken lightly in any way.

Even though Fedora and the Tar Heels didn’t say much about the players’ suspensions, many local bookies believe that it isn’t very difficult to figure out what could have happened.

Hopefully things will clear up regarding the player’s suspensions, and North Carolina’s fans would really like to see how the team will perform in the opener without them.