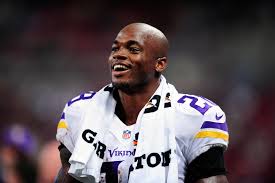 The NFL will reinstate Minnesota Viking star running back Adrian Peterson. This will be the seventh month anniversary since he was placed on the commishiner’s exempt list. The reigns will be taken of the running back, and will get back to football activities, what he is born to do. This will allow him to be available for all Vikings’ offseason activities.

The indictment on Peterson by grand jury was on September 12th, he then was placed on the commissioner’s exempt list with pay min you, on September 17th. This was after backlash from the public after the Vikings’ saying they were going to let Peterson play while his legal case was ongoing. On November 4th, Peterson pleaded a no contest to misdemeanor reckless injury charges from injuring his son while disciplining him last May.

Sportbook software services report that Peterson has be told by commissioner Roger Goodell that he must fulfill any obligations in Minnesota and Texas as well as additional commitments made to Goodell himself, including participating in counseling. Peterson has also been put under warning that any other violations of the personal conduct policy would result in additional discipline, which includes suspension without pay or banishment from the NFL.

So far it seems Peterson has obliged to all of the commissioners’ demands. He has gone to the psychiatry instructor that the commissioner has instructed Dr. April Kuchuk. They have setup a plan for counseling and treatment.

The Minnesota Vikings will start their offseason workouts Monday and there will be a mandatory minicamp in June. Then question still remains if Peterson will show up for of the team offseason programs. He might be a little bitter due to fact he felt the Vikings didn’t step up to his defense. He would be a major reason for his absence, as in his words he felt the decision to put him on the exempt list was an “ambush”.

“The Minnesota Vikings have been informed by the NFL that Adrian Peterson has been reinstated,” Minnesota’s released statement after the NFL announcement of the reinstatement. “We look forward to Adrian re-joining the Vikings.”

Peterson’s contract is $12.75 million for the next 3 years. Ben Dogra, Petersons’ agent has stated that the 30 year old back would like to play elsewhere. But the Minnesota Vikings don’t seem inclined to do so at this point.

Pay per head agents have the Minnesota Vikings at 60/1. Even with Peterson they are not a contending team, reasoning for the running backs displeasure. Live betting services will be available for the NFL once season start.