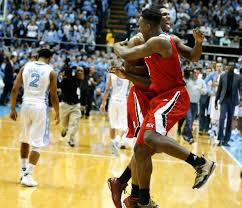 NC State went to the Smith Center looking for another win on the road in an effort to have a better opportunity to clinch one more tournament, instead of trying to beat UNC for the very first time in 12 years. Pay per head bookies saw that both were very nicely taken care of by the Wolfpack.

15 points were scored by Anthony Barber when the Wolfpack took out the Tar Heels (ranked 15th), on Tuesday night at 58-46, which gave them their first series win on the road in 12 years.

For the Wolfpack (17-11, 8-7 ACC), 14 points were added by Ralston Turner and Trevor Lacey each, in a second big win on the road this month.

“Our focus was just to come in and win,” said Lacey. “It wasn’t make history or none of that.”

NC State were not very impressive when it came to shooting, but they were tough on the court, keeping their cool while beating UNC (19-9, 9-6).

When the end of the game was approaching, the Wolfpack had the Tar Heels at their very lowest total in points in almost 30 years at the Smith Center, and for the very first time they took out a UNC team with Roy Williams as their coach at Chapel HIll.

“I think our guys came in here with a great belief and great confidence in themselves,” said Mark Gottfried, NC State coach.

The Tar Heels won 17 out of 18 games overall and since 2003 they did not lose to the Wolfpack at home.

For a full month, the Wolfpack were floating in the tournament bubble of the NCAA. It came after beating Duke, who were then undefeated, with six defeats in eight matches, but then pay per head bookies saw that the team followed that with an upset on the road on the 14th of February against Louisville, and now they had one more big win.

“It would be easy to think this has made our season and drop the rest,” said Turner. “We just have to be mature about the situation.”

At halftime, NC State were leading by 11 points, and early during the game’s second half by as much as 16 points. Then, after UNC scored 12 points in a row to increase their drive, the Wolfpack got back on track.

“We did some good things at times,” said Williams, “but the bottom line is North Carolina State kicked our rear ends.”