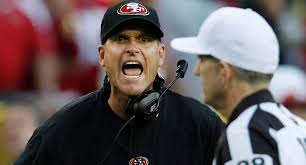 Jim Harbaugh said that the separation between himself and the 49ers was not a mutual one, something that caught many fans and pay per head services by surprise.

On Friday, the 49ers’ former coach said that it was the team that wanted to part ways with him.

“I was told I wouldn’t be the coach anymore,” said the coach. “And then … you can call it ‘mutual,’ I mean, I wasn’t going to put the 49ers in the position to have a coach that they didn’t want anymore.

As far as the coach can remember, the 49ers told him that he would not be going back to the team, and this was said on the Monday after San Francisco lost to Seattle on the 14th of December. Then, instead of parting ways with the team, Harbaugh said that he was looking to coach the team for the last two meetings, as he wanted to end what was started with San Francisco

Harbaugh was then able to finish the season for the team at 8-8, with a win of 20-17 against Arizona on the 28th of December. A statement was released by the 49ers after the clash with the Cardinals, saying that the team and the coach had a mutual agreement to part ways.

“Jim and I have come to the conclusion that it is in our mutual best interest to move in different directions,” said Jed York, 49ers owner. “We thank Jim for bringing a tremendous competitive nature and a great passion for the game to the 49ers. He and his staff restored a winning culture that has been the standard for our franchise throughout its history. Their commitment and hard work resulted in a period of success that should be looked back on proudly by our organization and our fans. We wish Jim and his family all the best.”

Harbaugh said the last couple of weeks that he spent with the team were somewhat strange as there were rumors saying that he would eventually be replaced by Jim Tomsula, DL coach.

“I wasn’t reading anything that was on the Internet, I was really focused on doing my job, but definitely walk down the halls and people look away or they look at you and you know something’s going on,” said Harbaugh.

San Francisco acquired the services of Tomsula on the 14th of January, and pay per head services saw that this took place over two weeks after the coach accepted the role of head coach at the University of Michigan, where he used to play college football.

Even though there were rumors that other teams in the NFL had interest in his services, which include the Raiders, Harbaugh also said that he never had a lot of interest in other jobs.

“I really didn’t look at any other situation,” said Harbaugh. “I didn’t do a pros and cons list or anything. It was just a decision I made from the heart and that was it.

“I was going to go to Michigan.”