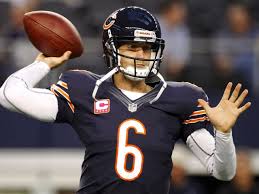 Jay Cutler, QB for the Bears, will be the one to start in the team’s last game of the season when they take on the Vikings after Jimmy Clausen had late concussion symptoms on Sunday evening, and on Monday, the team said that the player won’t be able to hit the field in the weekend, something that concerns fans and pay per head agents alike.

On Monday morning, the player was ruled out after being examined.

“Jay gives us the best chance this week. So that’s why he’ll be out there,” said the coach. “Jay said, ‘I’ll be ready to go.’ He empathizes with what Jimmy had gone through last night. He’s ready to go. He’ll be in this afternoon to get started.”

In Week 17, David Fales, who’s a rookie, will be the one to play as the No. 2 QB, and many fans can’t wait to see how the player will perform when he takes his place.

The Bears said that a concussion was suffered by Clausen in the fourth quarter of the 20-14 loss to the Lions on Sunday after he received an illegal hit to the head by Ezekiel Ansah, Detroit DE who’s well known for being a powerhouse on the field.

The player got a penalty of 15 yards, but Clausen continued to play in the game after he didn’t show symptoms related to a concussion just after the play took place or in the drive’s last four plays, as mentioned by the team’s official statement.

Chicago said that at the end of the drive, the player was evaluated further on the sidelines, but the player again didn’t show any symptoms or signs of a concussion. After the game took place, the player was checked yet again.

Clausen then called the team, telling them that he had delayed symptoms of a concussion, and Bears fans are very worried, as they know very well that this type of injury is nothing to take lightly at all.

Bears fans and pay per head agents alike believe that Clausen should be closely monitored after the hit that he took. Hopefully the player will be in good enough shape as soon as possible, but for now the most important thing is for him to properly recover.