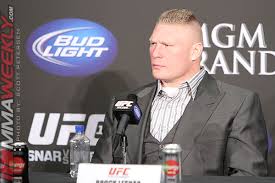 Brock Lesnar has ruled out returning to MMA and will remain with WWE. Lesner, 37 has told Sportcenter on Tuesday that he has re-signed with the World Wrestling Federation and has left the Octagon behind.

“I’m officially closing the door on MMA,” Lesnar stated. “It was hard. I re-signed last night with the WWE.”

Brock Lesnar is one of the odds on favorites this weekend at Wrestlemania 31, according to bookmaker’s solutions. The bout will be held in Santa Clara, California, and every kid will be stoked to see the towering Lesner in the ring with all there favorite WWE Superstars. His contract was supposed to expire at the end of the month, which leads to many people thinking that Lesner would end back with Dana White, but he chose to stick with Vince McMahon.

“It was a very hard decision at this stage of my career,” Lennar stated. “The fighter inside me wants to compete. The father and husband — I’m an older caveman now. I make wiser caveman decisions. So, I’m here to say my legacy in the Octagon is over.

“It was a hard decision to make. It took me a year. I’ve thought about this for a year. At the end of the day, it’s all about me wanting to have fun. The last two-and-a-half months I’ve been training to get back into the Octagon. I felt physically great, but something lacked mentally — and that’s not good.”
Lesner was present at the Ronda Rousey bout, even though he said he was there as purely a fan and not to use it as a bargaining move.

Lesner debut his MMA career in June 2007. That following year he lost to Frank Mir via submission at UFC 81. He was winner in his next bout and set up a heavyweight title shot against defending champ Randy Couture. Lesner ended the match 3 minutes into the second round by knockout to capture the belt.
He successfully defended his title against Frank Mir, at UFC 100, which till this day is still the highest-selling UFC PPV bout of all time.

Brock Lesner had an ongoing battle with diverticulitis, an intestinal disorder which he eventually returned form in July of 2010. He lost two of his next three fights and wasn’t really the same in his return.

“I could go back to the Octagon, but what am I going to gain? I was the UFC heavyweight champion of the world. Due to my illness, my career got cut short. That’s God telling you, ‘it’s time to move on.'”