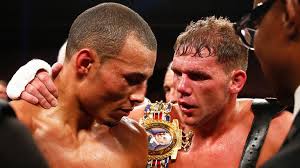 The very famous Billy Joe Saunders would like to see rival Chris Eubank Jr not say anything else after he was able to narrowly beat the fighter on points, in what pay per head services saw was a very tough battle in the ring.

Both middleweight fighters engaged in verbal swordplay before going fist-to-fist on Saturday, in a fight that saw Saunders edge the fight’s early rounds before a very gritty late assault was set up by Eubank Jr.

“All grudge matches are big fights,” said Saunders. “Whoever loses they have to shut up. After all the talking up, he’s lost so he has to shut his mouth, get to the back of the queue now and fight whoever he wants. That’s done.”

The Hatfield fighter said that if he ended up losing the fight he would quit the sport, but he continues to be on his way for a possible opportunity next year to try to win the world title, something that many fans hope will be accomplished.

“This was a big, big fight. I’ve got big things ahead of me,” said the fighter. “He’s at the back now, he’s forgotten about.

“I’ve put the pressure on myself – people ask me why I said I would retire if I lost. It’s because if he beats me, am I going to be world champion?

The 25-year-old, who is currently undefeated and is a favourite with pay per head services around the world, wants to take on the winner after Matt Korobov faces Andy Lee to try to clinch the empty WBO belt in Las Vegas next month, and fans all over the world are eagerly anticipating this showdown.

“Since I’ve been in boxing all I’ve wanted to be is world champion,” said Saunders. “Good luck to whoever wins out of Korobov and Lee.

“It’s not about who I want to win, it’s who deserves it.

“You have to go with Koborov, but I wouldn’t be surprised if Lee takes him.

“Lee has very good range and I think Koborov living in Russia, going to America, he’s got a few quid and a bit of fame – maybe he’s taken his eye off the ball a bit.”