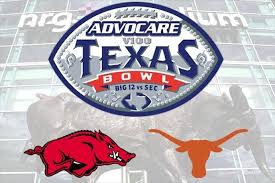 Arkansas and Texas are set to square off in Houston on the 29th of December, in a game that pay per head bookies can’t wait to see. Even though both sides didn’t meet since 2008, these two Southwest Conference teams are ready to renew their rivalry, and the game is set to be one of the bowl season’s biggest showdowns.

Late during the season, Arkansas took out the LSU Tigers and Ole Miss Rebels in consecutive meetings to become eligible for a bowl game. The RB’s, which are led by Alex Collins and Jonathan Williams have statistics that are almost the same, and this season were very impressive, posing a very big threat. Along with their scoring defense, which is ranked at No. 15, the Longhorns will most likely have to seriously struggle when they face the Razorbacks. If Texas’ defense isn’t able to slow down Arkansas’ rushing attack, letting QB Brandon Allen be in control of the game’s beat, things will not be easy for the Longhorns, and many fans are very well aware of this.

The Longhorns went 6-6 in the first season that they had with Charlie Strong as the school’s head coach, and except for having been beaten by the BYU Cougars, Texas only lost to opponents who are ranked. A season of .500 with an offense that did not move beyond average did not go down very well at all with the Texas fans when the season started. Tyrone Swoopes has everything necessary to be a stellar QB, and having players like Jaxon Shipley, John Harris, Malcolm Brown, and Johnathan Gray, there are no reasons why he shouldn’t be a star.

In this meeting taking place between former rivals, the Razorbacks could very well be the country’s top 6-6 team. Pay per head bookies saw that Arkansas gave the Alabama Crimson Tide and Texas A&M Aggies plenty of trouble on the field, but they ended up losing both of these contests, which is the reason why the Razorbacks are going to Houston and not somewhere else. However, Arkansas seem to be going the right way even though they were beaten by the Missouri Tigers to finish their season, and the Longhorns were pounded by TCU. The Longhorns could very well stop the Razorbacks’ running game, but what will happen come gameday remains to be seen.

Louisville could have a tough time stopping Georgia’s running game

LSU and Notre Dame must work on their offenses

Miami ready to battle South Carolina in the Independence Bowl