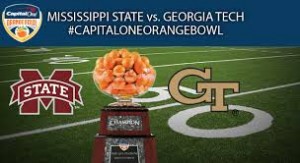 Mississippi State (No.7) and Georgia Tech (No. 12) are getting ready to square off in Miami in New Year’s eve when the Capital One Orange Bowl gets underway, and pay per head wagering companies wonder who will be the team to come out on top.

The Yellow Jackets and coach Paul Johnson will seriously depend on the team’s running game in an effort to take out the Bulldogs. Their season’s first 10 victories came thanks to their very threatening offense, putting their opponent’s defense in plenty of trouble. The Yellow Jackets have what could be country’s third best offense. For each game played, Georgia Tech have a 333.6 rushing-yards average.

On the other hand, the Bulldogs’ defense is nothing to take lightly at all, and they should have no problems countering the Yellow Jackets’ offense. But the team was very well known to do a horrible job on the field, and even coach Dan Mullen said that they did an atrocious job after 444 yards were given up by their defense when they ended up losing the Egg Bowl to the Ole Miss Rebels.

Something else that’s bad about Mississippi State’s defense is that this season they didn’t take on what is a triple-option offense, something that proves to be very effective for Georgia Tech. 2009 was the last moment that the team took on this type of offense, and this ended with a 42-31 pounding by who else but the Yellow Jackets themselves. In fact, Georgia Tech were the ones to win the last four games that both teams played.

However, not all is bad for the Bulldogs, as the team does have a proper offense. In a similar way to Georgia Tech, they also just depend on their rushing attack. RB Josh Robinson and QB Dak Prescott are both players who are well known for their great skills in their rushing game, something that could seriously help their cause.

This meeting should be an even one, and fans all over the country believe that they’ll be in for a real show when the Bulldogs face the Yellow Jackets. A very intense matchup is expected by many experts and pay per head wagering companies alike, and they believe that once the New Year arrives, Mississippi State could very well be the ones to clinch a victory in the Orange Bowl, but this is yet to be seen.