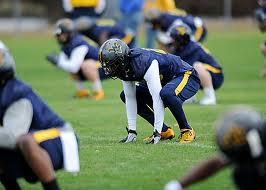 According to a source, Pittsburgh Steelers linebacker Terence Garvin was fined $25,000 on Wednesday by the NFL for the block that gave Cincinnati Bengals punter Kevin Huber a cracked vertebrae and broken jaw, leaving many fans and pay per head services very concerned over the player’s condition.

On Sunday night, pay per head services saw that Pittsburgh’s linebacker leveled Huber on Antonio Brown’s 67-yard punt return for a TD, and Huber’s chin was hit by his helmet. Both the Steelers and Garvin expected a fine for the hit that ended the seasons for Huber.

Price per head services know that Garvin is expected to appeal. The player said that there were no intentions to hurt Huber, whom the Bengals placed on Tuesday on injured reserve.

“I fell down on the play and I got up and saw A.B. coming towards me so I was like, ‘Oh, I’ve got to try and help him break on this play,’ ” Garvin said. “I wasn’t out there trying to be vicious. When you’re in the game you’re really just trying to make a play and help your team out.”

Pay per head services found out that on Tuesday night, Dean Blandino, the NFL’s head of officials, said that Garvin’s hit was illegal and that the player should have been given a personal foul penalty.

Mike Tomlin, Steelers coach, said that Garvin carried out his assignment on the play. However, pay per head services saw that Tomlin also acknowledged that “the nature in which the block unfolded is not what we’re looking for. It’s not what we coach. It’s not what he wants, but that play hit pretty quickly.”

Huber did not show ill feelings on Wednesday toward Garvin.

“There really is not much I can do about it now,” Huber said. “Me just getting mad and stressing about it is only going to make it harder to get through.

“It is what it is. It’s part of the game, I know — big hits. Unfortunately I got one of the big hits, and I’ve got to deal with it. I’ll be fine. I’ll be back next year.”