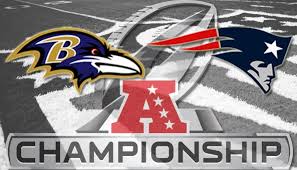 The Patriots became the favorites over the Ravens by 7.5 points for their AFC divisional playoff meeting only minutes after the Steelers were beaten by Baltimore 30-17 when they faced each other in a wildcard game that was a big hit with fans and live betting services.

In Las Vegas, several sportsbooks services, which include William Hill, Caesars, and the Westgate, opened up the betting line at 7.5, and early on, the Westgate moved it to 8.5.

The game’s total opened up at 49 in all three of these places.

In the money line, the betting line with William Hill opened up with the Patriots being the favorites at -360, and the Ravens were at +300, making them the big underdogs.

This season, the Ravens were 4-4 SU and ATS in road games, but many handicappers – especially those who follow the trends of the postseason – might be leaning towards Baltimore in this clash.

In recent years, the Patriots were not a very good wager at all in the playoffs when it came to games played at home. Ever since the postseason of 2008, New England are only 3-6 ATS at home when they lay points in their home games. Overall, they’re 3-10 ATS in the team’s last 13 games in the playoffs.

When it comes to the Ravens, they were very solid on playoff road meetings, as since 2011 they went 5-1 ATS while playing away, including the win against the Steelers on Saturday night. Live betting services saw that during that run, two covers were made against the Patriots– a 28-13 SU win in 2013 as the dogs by 8 points, and in that year they were able to win the Super Bowl by beating the 49ers; and a loss in overtime of 23-20 in 2012 as the underdogs by 7 points. Overall, Baltimore were able to cover in the last six games that they had in the playoffs, proving to be a force to reckon with on the field.

The clash between the Patriots and the Ravens will most likely prove to be a real battle that’s eagerly anticipated by many in the football world. Who will win and cover? Right now nobody knows, but what the fans do know is that they’ll be in for plenty of entertainment.