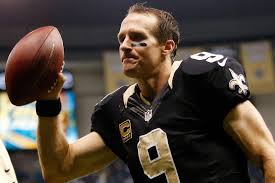 Last season didn’t play out very well at all for the Saints, as they weren’t even able to make it to the playoffs. Sportsbook software services saw that they were seriously struggling with their offense and defense, and the fans were beyond frustrated.

However, things could be different now, as the team made several changes during the offseason, like Jimmy Graham going to the Seahawks. Despite the changes, Drew Brees seems to be very optimistic about the new season, as he told ESPN that he’s feeling “very convinced” of winning one more Super Bowl before hanging up his boots.

“I’m very convinced. It’s what drives me and keeps me going. I love this game for so many reasons,” said Brees. “The opportunity to have played it for going on 15 years is rare, it’s unique. I want to continue to play for absolutely as long as I can, as long as I’m having fun, playing at a high level and maybe I’ll stay healthy, why not play this game? It’s a blessing. The challenges and the opportunities that come along with it each and every year, I don’t know how you mimic this in any other element of life.”

The famous QB already spoke of the trade involving Graham, saying that it left the whole team shocked, but also said that losing the player left him feeling “heartbroken”.

“I was heartbroken, because Jimmy’s become a very close friend. We had five great years together, and I think just the the unexpectedness of it. We had big plans for the next few years and more so than anything else it’s just not being able to see that guy every day. He’s a joy to be around. He was great to play football with, but more importantly a great guy in the locker room,” said Brees. “We had a ton of fun together. He’s like a little brother. Obviously we just signed him to a big deal last year and you just have this long-term mindset with him. And then all of a sudden he’s gone, the trade’s made and listen I have full trust in this organization, Mickey Loomis and Sean Payton, and the direction that we’re going.

“And you trust that but man, you’re certainly going to miss a guy like that.”

Brees also said – again – that he wants to stay in the game until the age of 45.

“Do I think that’s possible? Yes, absolutely. Could that happen? Yes. Would I love for that to happen? Yes,” said Brees. “I’m not naïve to knowing that I’m on a series of one-year contracts, just like everyone else in the league. I feel like I can find that juice. I’ve got it. It’s there. I’ll keep having fun and keep slinging it around.”

Nobody knows how much longer Brees will stay in the game, but his fans know how much more he can accomplish in the sport. Will he win a Super Bowl this time around? Only time will tell. However, sportsbook software services believe that he’s very hungry for the title, and in NFL, hunger to win is vital.