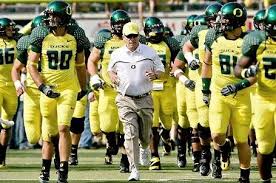 Even though they had a very good season, the Oregon Ducks probably look back at their previous season and regret not winning the National Tittle. The Ducks came into that game as the overall per head favorites, and were upset by a great Ohio State team. This year the Ducks want another shot at the National Championship, but with Mariotta moving on to the NFL, there is a void in the Ducks leadership that will be very difficult to fill up.

The Ducks have suffered the departure of starters in their offensive and defensive lines. The overused term “rebuilding year” that sports teams say when they are dealing with the departure of several key players, rings very true when describing the current status at Eugene. And although the Ducks are still respected by College Football in general by being highly ranked as #5 for the upcoming season, there are plenty of questions that will be answered once the season begin.

The Oregon Ducks keeps their coaching staff intact coming into this season, this is really not surprising. This will keep the same mentality and strategy that proved to be successful in the previous years for the Ducks. Their offensive approach to the game has a very impressive balance in their pass-run game. Meaning that this is a team that puts numbers on the board and often is a favorite to cover the spread in bookmaking services. Granted, they do not posses the same offensive team as they did on the 2014 season, but according to insiders’ reports they will have a good and effective offense that will continue the same path last season’s team had.

Defensive wise, the Ducks have a good strong defensive line made up of four experienced seniors starters. Thankfully for the Ducks, they have a tough defense that can manhandle opposition and play a good physical game.

Their Secondary, on the other hand is perhaps is their weak spot, as the Ducks will probably will be forced to result in using sophomores and freshmen. They might turn out to be a surprising unit, but it is best to be cautious and not expect to much from them.

All things considered, the Oregon Ducks will have a decent year but it will come with some growing pains. The proverbial “rebuilding year” will have their ups and downs and while they will prove to be one of the top teams in the nation, they are not quite ready to make it to the national Championship game.