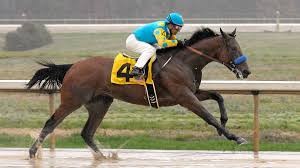 Imagine being able to watch the potential next Triple Crown winner work out. If you’re in the Kentucky area you may want to swing by Churchill Downs between 8 and 9am every morning until Tuesday, as American Pharoah will be exercising and trying to get in tip top shape with sportsbook software solutions for next week’s Belmont Stakes. Head to Gate 17 for public viewing, and stop and have some breakfast while you’re there.

Also at Churchill is another entry, Keen Ice, who will be training in the mornings as well.

“I’m really happy with what he did,” exerciser Martin Garcia said. “He came back like [it was] nothing. He loves to run. He’s getting more mature and I think right now he’s starting to realize what’s going on and he likes it.”

“The way he’s been running and the things he has done, he’s done very easily and I think he’s going to make it,” he said. “Before, he was green and he really didn’t know what was going on. He’s starting to realize what is [going on] now. He’s learning really well.”

Trainer Bob Baffert was pleased with the results and how well the horse was handling the track.

“We’re just going to stay focused, keep the weight on him and keep him happy like the way he looks today. Next week, we’ll do sort of the same thing with him – just cruise him around real easily, ship to New York and we won’t do much with him up there.”

This will be Baffert’s fourth attempt at the Triple Crown, after previous attempts with Silver Charm in 1997, Real Quiet in1998 and War Emblem in 2002 and sportsbook software solutions have seen an increase in Triple Crown wagers this year.

“Before, I felt that there was more pressure,” Baffert said. “But now I’ve been through it, I know what to expect and I know that at the end of the day you need a good horse and you have to be doing really well. As for what I saw today I don’t see any regression. We don’t want to see regression, but he’s still going to have to run a top race.

The Belmont Stakes is the third race of the Triple Crown and takes place on Saturday June 6th.