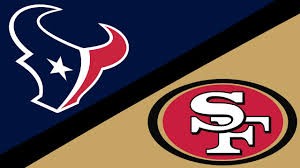 This Saturday night will see the return to the field of the Houston Texans taking on the San Francisco 49ers in the very first preseason game for both squads. The Texans as the home team are being considered by the best price per head agents and pretty much every pay per head sportsbook as the favorites by -2½, really a very close margin and generous margin considering the current status of the 49ers. The total for the game is on an average 35½.

The mantra for the 49ers this season must be very simple: “Prove them wrong”. Right now it is almost an overall consensus throughout the league and the online gaming community is that San Francisco are setting themselves up for a disappointing season. Practically every single Pay per Head sportsbook is not giving them much of a chance this year. And with recent unfortunate events raining down on San Francisco’s team, not even the most optimistic Niners fan has much hope.

The Texans are also facing a challenging season, their depth is not stellar and they are particularly looking shaky on their running game due to injuries. This game is a real opportunity for them to start fully testing what their flaws and virtues might be. Since they are the home team in very safe to take them as the favorites, but it would be wise not to consider this game not being a close one. Also it would be a good conservative play to take the under on this game.

The Texans have one thing in common with the Niners, they are aiming to prove some naysayers wrong this season and they are taking the preseason as an opportunity to really prove to everybody and themselves that they are fully capable of improving their 2014 record of 9-7. At this point, experts are still not impressed with the Texans chances, while most acknowledge the freak of nature that is J.J. Watt, the Texans have several elements of their game that are yet to be proven.

This game marks an opportunity for both teams to score morale points, to help them boost their confidence for the upcoming season that will see a lot of tough competition for the both squads. However online bettors should at least keep an eye out for the Texans, because even though they might not be expected to make an impact, they could surprise you. We’ll just have to wait and see.