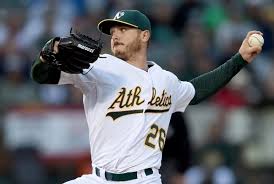 Per Pay Per Head Sportsbook the Oakland Athletics have started their fire sale and have sent Scott Kazmir to the Houston Astros for 2 minor leaguers RHP Daniel Mengden and C Jacob Nottingham. The Oakland Athletics feel like it’s time to start trading away certain players for assets at this point. The Athletics are intrigued by catcher Jacob Nottingham, and this swap will help the Astros with a top tier starter. The Astros haven’t been to the playoffs since 2005, while being swept by the Chicago White Sox.

Scott Kazmir was actually getting ready to start when he heard the news. He then was seen say goodbye to his teammates. Kazmir got a call from A’s general manager Billy Beane. “It felt like it just hit me at once. It’s going to take some time to sink some stuff in,” Kazmir said. Kazmir is expected to join the Astros on Friday in Kansas City.

Drew Pomeranz started in place of Kazmir on Thursday against Toronto, and Oakland recalled pitcher Arnold Leon from Triple-A Nashville to take Kazmir’s spot. Kazmir was being shopped as is many other Oakland players and Billy Beane said the trade came together pretty quickly. “We have to be realistic with where we are,” Beane said. “The math doesn’t necessarily work in our favor given the level of play we need just to get back in it.”

Melvin said he didn’t have time to address the team before the game and said the players know its business. “When you’re here in Oakland, you understand that moves are made, whether it’s offseason or in-season,” Melvin said.

The Athletics acquired Scott Kazmir as a free agent in December. He was 20-14 with a 3.12 ERA in 40 starts over parts of two seasons, including making the AL All-Star team last year.

Houston began the day in second place in the AL West, two games behind the Los Angeles Angels.

“Scott Kazmir is one of the best pitchers in the American League and strengthens our rotation,” Houston general manager Jeff Luhnow said. “His addition gives the Astros a better chance of reaching and succeeding in the postseason. It has been a while since the Astros have been relevant late in the summer and winning now is a priority.”

A message from Kazmir to his Athletic teammates: 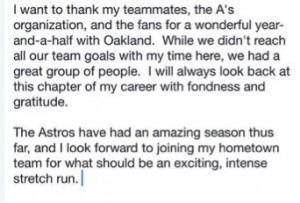