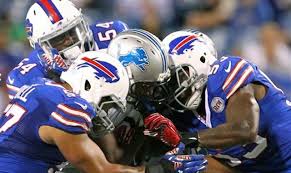 At the last week of the NFL preseason the Buffalo Bills will go to Michigan to face against the Detroit Lions in the final preparation game before the season kicks off. While most casual football fans don’t regard this game as meaningful, live betting fans can find still many points of interest that can result as useful points for this game and maybe even the coming regular season.

All over the league most teams are expected to give playing time to players on their roster that they want to test out and check their performance. The Bills, for example, will want to make sure that their Cornerbacks are ready for a challenging season. As for the rest of the team, there will a shuffle of players taking the field with several players trying to make some sort of an impression to be taken into consideration for future games.

The Bills defense is having major concerns with their secondary line. They still haven’t been able to fully be confident enough in that position. For this game they will hope to see some much needed improvements.

Another thing to watch for in Buffalo’s game will be how are they are going to use Marcus Easley. The special team player has been causing a positive impression on the Bills coaching staff as he managed to look good receiving. If he continues to perform as good as he has done so far, he might be able to land himself a spot on the Bills strategy as a fourth receiver.

As for the Lions, it seems that they are already set for the upcoming season and they might not play many of their starters this game. They will look to use this game to provide more playing time to some of their substitutes and rookies. While there is some talent on their team awaiting a chance, this game is looking to be a tough one for the Lions to overcome. It is fairly evident that they are focused on getting ready to begin the season and not risk most of their starters for this game.

Currently, early odds for this game are placing the line as EV. Live betting players looking to place a wager on this game will have a safe bet on the Bills. However do not this to be a high scoring affair. We pick Buffalo to win this game 17-14.