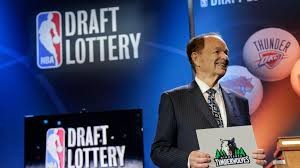 After losing 66 games in the 2014-2015 season, on Tuesday night they were the big winner in the 2015 NBA Lottery. The Minnesota Timberwolves were able to land the 1st pick in the draft. The Wolves had the highest percentage of all the teams to come away with the pick at 25% per Bookmakers Solutions and Sportsbook Software.

The Los Angeles Lakes came in second, and the Philadelphia 76ers rounded out the top 3. The New York Knick dropped two spots to 4th and the Orlando Magic came in 5th.

The NBA draft will be held at the Barclays Center, home of the Brooklyn Nets, on June 25th.

Flip Saunders had this to say about Tuesday lottery, it was a “very emotional” day for the franchise and its fans. He said that the team will consider all of its options with the pick.

“Having the No. 1 pick gives us the opportunity to really evaluate everybody and really see what direction we want to go,” Saunders said. “At this point, we’re open. We’ll pick the best player for us on June 25.”

Timberwolves GM Glen Taylor: “I’m just really happy for the Minnesota fans because they’ve been so loyal and they’ve been so patient with us and this has been such a difficult year.”

This would mark the first time the Timberwolves would have the first pick on their own accord, and if not traded it would be the third straight number 1 pick on their roster. Taylor said trading the pick is “highly unlikely” but “part of the discussion.”

After the Lakers obtained the 2nd pick, Coach Byron Scott had this to say “Obviously this is a step in the right direction for our franchise and the process of being back where we should be in the next year or so,” Scott said. “I can’t say it’s a way to announce that we’re back. I think we’re on the right track.”