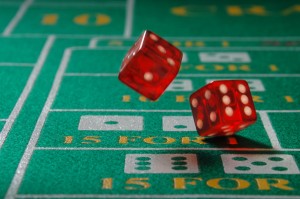 Live betting services offer more than just sports betting, and the casino is where the action is after hours. Many people are familiar with slots and blackjack, but many pay per head customers aren’t sure about some of the other games. Let’s have a closer look at the game of craps.

The shooter must have a bet on the “Pass” line or the “Don’t Pass” line for live betting service.

The shooter’s first roll of the dice is called the come out roll and if the come out roll is a 7 or 11, which is called a natural, the pass line wins, and if it’s a 4,5,6,8,9,or 10 then these figures become point numbers, and establish the point to pass.

Each round has two parts: “come-out” and “point”. To start a round, the shooter makes one or more “come-out” rolls. A come-out roll of 2, 3 or 12 is called “craps” or “crapping out”, and anyone betting the Pass line loses.

Each roll of the dice has a name. Two ones are called snake eyes, while two sixes are called boxcars. A four and a two is an easy six, while two threes is a hard six. etc

The types of wagers at the craps live betting table are:

Pass line bet: The fundamental bet in craps is the pass line bet, which is a bet for the shooter to win.

Come bet: A come bet is like starting an entirely new pass line bet, unique to that player. A player making a come bet bets on the first point number that “comes” from the shooters next roll.