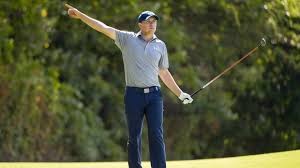 In his first showing as Golf’s world ranked No. 1 player, Jordan Spieth might just be keeping the seat warm for Rory McIlroy for a few days. Pay Per Head Sportsbook still has him 11/2.

On route to a 4-over-par in round 1 of the Barclays he didn’t play as a No.1 ranked player should. If Spieth finishes outside of the top 60 this week he can lose that No.1 depiction. McIlroy decided not to play this week in order to rest up for the Deutsche Bank Championship in Boston over Labor Day weekend.
“I would argue that this was … After the tee shots, this is the worst round I’ve played in years, for hitting that many fairways. I’ll just take it at that, that it’s just a fluke”

In a crazy round that saw the 2 time major champion shoot 2 under on his first nine holes, but 6 over on the second nine, Spieth felt he could turn it around as quickly as Friday’s second round at Plainfield Country Club.

“I would argue that this was … After the tee shots, this is the worst round I’ve played in years, for hitting that many fairways,” said Spieth, who found the short grass off the tee on his first 11 driving holes but none of the last three. “I’ll just take it at that, that it’s just a fluke.”

Spieth hasn’t missed a cut in more than three months. Starting on the 10th hole, Spieth couldn’t have played much better, scripted opening nine. After a birdie on No. 10, Spieth had several good looks to get deeper into red numbers, but he failed to do so until he drained a 16-foot putt on the par-5 16th to get to 2 under.

After he birdied on Nos. 17 and 18 burned the edges of the cup. He started the front nine — his back nine bogeys, bogey double before righting the ship with a birdie on the par-4 fourth hole. But three bogeys in his last five holes including a 3-putt on No. 9 to a hole location that looked like it was on the side of the hill ended his day north of 100th in the field of 120.