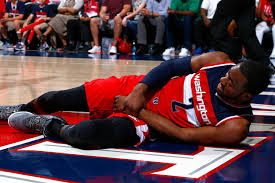 Bookmakers Solutions and Pay Per Head Sportsbook hold the Wizards t 30/1 to win it all and this undoubtedly will make it much harder to realize their goal. Wall said he initially thought that he had fractured his wrist, on that he had broken in high school. Wall stated that he had gotten two opinions on his ailing wrist and was told that it was just a bad sprain.

His left hand swelled up significantly after game 1 versus the Atlanta Hawks. ESPN’s Britt McHenry reports that Walls wrist was so swollen that he couldn’t even be evaluated. The team stated it need the next 48 hours for the swelling to subside.

John Wall sat out game two and went through a battery of test consulting with several physicians and specialist to determine the next course of action. “With the swelling and the stuff it has been, we knew maybe there’s not good news there,” head coach Randy Wittman said. “We will see as we move forward what that actually means. He is still consulting with doctors. It’s still pretty swollen. He can’t do anything let alone if he didn’t have any broken bones.”

Wittman said that Wall is one of the toughest players around and he hoped that his point guard would return at some point. I hope he could have played Game 2,” Wittman said of Wall, who was a late scratch before that game. “But he didn’t. We just got to move one day at a time. There’s no timetable for something like this, I guess is the best way I can put it. We got to be prepared as a team to play without him. I think the guys are doing that.”

“Knowing John, if there is a slight chance he can, he’s holding out for that,” Wittman added. “That is the type of kid he is.”

Now the Wizard is looking at an uphill battle to beat the Hawks without their star player.