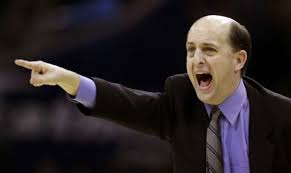 According to league sources Jeff Van Gundy will be a candidate for the head coaching position in New Orleans. The job became available after the firing of Monty Williams. Live Betting Service was able to book more Pelicans games due to their rise in competitiveness. Jeff Van Gundy, Golden State assistant Alvin Gentry, and Chicago Bulls coach Tom Thibodeau are the three candidates that are considered for the head coaching position.

Out of the three Alvin Gentry is the only one to have formally interviewed for the position. He was granted permission by the Golden State Warriors before there play in the Western Conference finals. Tom Thibodeau on the other hand is binned by his contractual situation with the Chicago Bulls.

As of now Pay Per Head Sportsbook have the Golden State Warriors t 1/3 to win the championship.

Van Gundy has been a TV host for the last 8 seasons. His return to coaching has been inevitable and the presence of a young superstar has made the Pelicans job one of the most coveted in the NBA. Van Gundy has declined to discuss the situation.

“I have too much respect for the coaching profession and the sanctity of a job search to publicly speak about any job openings,” he said. “That’s really not my style. So I’ll just leave it as I’ve said many times.

“I have the absolute utmost respect for Monty Williams. I coached him. I know what a class guy he is. He has integrity and humility, and I thought he did an outstanding job. I think he can be very, very proud of what he was able to accomplish there. You know, as far as the job search, I don’t get into the public domain on that. I just don’t think it’s right.”

Ex OKC coach Scott Brooks said he has declined to interview for the Pelicans job. ESPN.com has also reported that Denver Nuggets interim coach Melvin Hunt has a better chance at remaining as head coach.

The Pelicans will try to go a little faster paced next season. They will try to take advantage of Anthony Davis’ athleticism. Alvin Gentry is known to be league wide as an offensive minded coach. This could be the major reason for Monty Williams firing as the Pelicans were ranked 27th in pace last year. With Anthony Davis the budding superstar the sky’s the limit for the Pelicans.