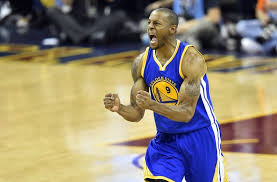 Iguodala who had started 758 consecutive games was asked by Kerr at the start of the season to come off the bench. His willingness to do so might have set the Warriors up for success very early on. Before ascending to the starting line-up for Andrew Bogut, the Warriors where in a rut and displaying bad body language.

“He was great the entire series. But he saved this season for us,” Warriors forward Draymond Green said. “I always say Andre’s a pro’s pro. He’s a professional guy, and it showed, and that’s why he’s the MVP of this series, and that’s why we’re champions.”

Per best pay per head company, Andre averaged 16.3 points, 4 assist and 5.8 rebounds for the series. In Game 6 he came away with 25 points and added 5 rebounds and 5 assists.

“It’s never one-on-one, but I think his ability to play multiple positions for their team along with some of those other guys allowed their team to be so dynamic,” James said.

Congrats to the Warriors, they were true champions and showed that they were the best team in the NBA this year. Stephen Curry had a remarkable season and led his team to the promise land in just his 5th year in the league. The sky is the limit for this team; hope they have enough space in the trophy case.