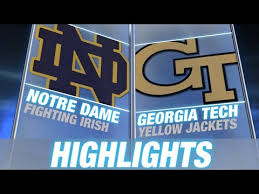 Price per head sport betting fans, specially those who were planning to wager on the Fighting Irish, probably cringed when they heard the news: Malik Zaire came down with an injury that would sideline him for the rest of the season.
Right then and there, Notre Dame’s hopes of making it to the National Playoffs received a very big blow. However, and much props to the Fighting Irish, they overcame the adversity and managed to win their first two games of the season. But in week 3 they will face a very tough challenge when they host the Georgia Tech Yellow Jackets.

Georgia Tech has dazzled in their first two outings, with a very strong offensive performance. In their two games they have reached an average of 64 points per game. Their passing game has been precise and their running game has been impressive. They have mounted a total of 562 yards of offense so far. That is why there is no surprise that the Yellow Jackets are the -2 favorites by Price Per Head Sport Betting sites. Of course that, and Notre Dame’s injury woes.

The Quarterback position in Notre Dame will be taken by DeShonte Kizer, who after Zaire came down with an injury stepped up to the occasion and handled himself quite well. The Notre Dame offense with him on the field, looked great. Kizer even managed to have some big plays of his own, including a 39-yard touchdown pass with the clock winding down. It will be a great test for him and the rest of Notre Dame to measure up to a efficient and dominant Georgia Tech team. This will definitely be one of the most wagered on game in price per head sports betting sites of week 3. Can the Fighting Irish pull an upset this Saturday?

This will be a pretty damn good football game and it will have not shorts of fantastic plays, as both offensive units have extremely talented players. However, when firepower is measured, Georgia Tech appears to be a step above Notre Dame. The Fighting Irish will fight tooth and nail, and Kizer will show the leadership they need from him, but the Yellow Jackets will steal away this game, barely. Dare we say it might come down to the wire when it comes to these two schools. Per head sportsbook users should bet the under on this game, final score will be 27-24 in favor of Georgia Tech.