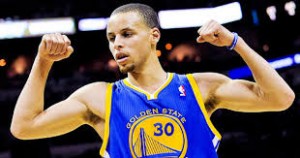 With more than a week till the NBA Finals start there is a lot of time for the media to probe. The one question has come to the forefront is anyone can stop the league’s MVP Stephen Curry. LeBron James responds “Well, the same way you slow me down,” James said. “You can’t.”

Per Bookmakers Solutions Curry’s numbers have jumped in the playoffs from his MVP regular season numbers of 23.8 points and 3.6 made 3 pointers per game. Sportsbook Software have Curry’s numbers now at 29.2 points per game 4.9 made 3 pointers and also to boot won the voting against James with 1,198 to James 552 who ended up coming in third place. James gave Curry his blessings in way by saying he is a worthy MVP.

“He has a great motor,” James said. “I think a lot of people don’t understand how great his motor is. He never stops moving. His ball handling, his ability to shoot the ball off the dribble and off the catch. It’s uncanny. I don’t think there’s ever been a guy in the league to shoot the ball the way he does off the dribble or off the catch, off the ball. He just creates so many matchup problems for your defense, and you just always have to be aware.”

The task will now fall on Kyrie Irving who says his injury is a good spot after missing two games in the Eastern Conference finals. “It’s a total team effort,” Irving said. “I mean, obviously, I will be starting out on him and whatever happens going forward throughout the game we’ll make adjustments, but for me, whenever we are guarding him, it’s a total team effort and team defense to kind of limit his touches and limit his shots. He does a great job of getting open, and he’s got the quickest release I’ve ever seen and he just knocks down shots — tough shots — as well, so it’s a total team effort.”