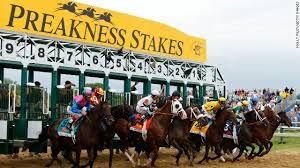 American Pharoah and jockey Victor Espinoza better have some kind of strategy going into Saturday, because the winner of the Kentucky Derby drew the worst possible starting gate in live betting services for the Preakness, number 1, against the rail.

We have said it before, that there is a slight possibility of a horse winning from off the rail, but boy is that a slim chance.

Yet despite that chance, many eyes will be on the Kentucky Derby winner, American Pharoah, and whether the horse can pull off another win.

“I’m still on cloud nine or should that be cloud 49! I can’t tell you… it’s just not sunk in yet,” said owner Ahmed Zayat.

Live betting services followed the race closely and are excited for trainer Bob Baffert’s double showing in the Derby.

“To win the Kentucky Derby is such an incredible accomplishment for me, my family, the stable, for everyone in such a short period of time, said Zayat.

“We’ve had several starts in this race and been very, very close. We’ve had horses leading going into the home stretch where for a fraction of a second I thought we’d get it done. But it was a promised land never reached… until now.”

With only 8 horses scheduled to start the 2015 Preakness, there may be a chance that both Baffert trained horses can push their way off of the rail on Saturday, as his number 2 horse, Dortmund drew second position with live betting services.

“I can’t believe I drew the 1-2 of all draws,” a disappointed Baffert said, “we’re going to find out.”

If American Pharoah pulls off a win, it will put Baffert in his fourth Triple Crown attempt.