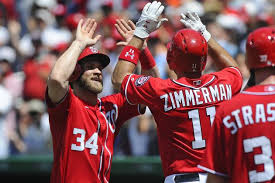 Max Scherzer, Stephen Strasburg, Jordan Zimmermann, Doug Fister and Gio Gonzalez, this is the starting rotation for the Washington Nationals. They have a starting five that can rival those of the Atlanta Brave’s golden years. All five starters are between 26 and 31, and in the prime of their careers. Can someone say lightning in a bottle, because these guys are electrifying?

They went out this year and opened up the check book to sign Detroit Tiger’s ace Max Scherzer. Scherzer went 70-24 over four years with the Tigers and changing leagues might even help to better those numbers. Switching up to the National League will be a plus for Scherzer as it is to any pitcher changing lanes.

Stephen Strasburg, 1st round pick of the Nationals in 2009 amateur draft. He cm in like gangbusters a showed the world what he was all about. He had a magnificent rookie year until Strasburg tore a ligament in his pitching elbow. That was a devastating blow both for the Nationals and Starsburg. He required Tommy John surgery and a year of rehab. Through his early trials and tribulations Strasburg has returned to form even earning an All-Star appearance in 2012. Still he is the second pitcher in this National rotation.

Jordan Zimmermann, 2nd round pick of the Nationals in 2007.Zimmermann won the first two starts of his career. A feat only done by a National/Expos pitcher since Hall of Famer Randy Johnson did back in 1988. He has also come back successfully from Tommy John surgery and is looking to make a significant jump in his career ala Stephen Strasburg.

Doug Fister, he was traded from the Detroit Tigers to the Washington Nationals for utility man Steve Lombardozzi and left handed pitcher Ian Krol and Robbie Ray. Needless to say the Nationals won that deal and reaping the benefits of such move to this very day. Fister throws four pitches and is mainly a groundball pitcher. That is a great combination for success in the Nat’s ballpark.
Giovany Aramis Gonzalez, also known as Gio Gonzalez is the fifth starting pitcher for this dynamic group, but can easily be a number 2 or 3 anywhere else. On December 23, 2011 Gonzalez was traded to the Nationals for Brad Peacoack, Tom Milone, derrick Norris and A.J. Cole. On January 15, 2012 signed a five year extension worth $42 million through 2016. He will be holding down the backend of the rotation this year and is another weapon for the stacked Nationals.

Price per head agents have the Nationals at 6/1 the favorites to win the World Series. They have the best rotation in game today. They have star players in the field, but do they have the experience needed to win it all like the San Francisco Giants do.