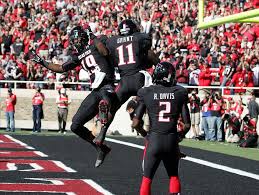 Texas Tech could have some good things going for them, as on Saturday, their Red Raiders get to play at home against the Mountaineers, who they took out in the last two seasons. Local bookies were taken aback when they saw that in one of these wins, they gave West Virginia – who was ranked 5th back then – a thrashing of 45-14 at Jones AT&T Stadium.

However, this year West Virginia are apparently in a better position to take on the Red Raiders.

This season, West Virginia’s team is much better off, and many fans are well aware of this. Through five games, the Mountaineers have a rushing attack in the top five at 170 yards-per-game, as well as the top passing offense in the league at almost 382 yards-per-game. Thanks to both of these accomplishments, West Virginia have the Big 12’s second best offense, with a very nice 553 yards-per-game average.

“They’re running the ball very well, the quarterback looks like a new guy, he’s playing at a tremendous level, 70% completion,” said coach Kingsbury. ” Then they have one of the best receivers in the country. Pick your poison on that deal.”

This season, Kevin White, who’s the top WR for the Mountaineers, was a serious force to reckon with. After the player made a great 132 yard display when his team beat Kansas 33-14, he matched the school record that was made by Stedman Bailey of five games in a row with 100 receiving yards, and many experts agree that the player could be a huge threat for the Red Raiders.

“We are trying to find the right combination of four or five guys that step up and take over,” said Kingsbury. “For the time being, not many of those guys are doing it, so we have to continue to push them. They have to grow up and continue to play more and get better.”

Even though the Mountaineers hit the field on Saturday with one more victory this season than the Red Raiders, the losses they suffered are nothing to laugh about. They lost to the Alabama Crimson Tide by 10 points at the Georgia Dome, and 45-33 to the Oklahoma Sooners. Even though the Mountaineers lost both of those meetings, they were able to prove that they’re very capable of taking on the top teams of NCAA football.

QB Davis Webb and many local bookies can see that West Virginia made plenty of improvements since last season, and are well aware of the threat that they pose this time around.

“They’re an improved team and they’re probably thinking we’re not as improved as we were last year. We will see what happens on Saturday because we’re really motivated and they’re really good, so it should be a good game.”

Washington could have a very close game with Stanford

Kelly, Drake, and Devall are out for Alabama

Oklahoma could easily take out Texas